There’s a bit of drama in the Yoruba movie industry at the moment and here’s how it started.

An Instagram blog reported that Nollywood actress, Liz Anjorin was ‘held and searched for drug peddling’ during her recent hajj trip to Saudi Arabia. The report went on to say the actress was ‘teary all through her encounter with the security agents at the airport’.

In her response to the story, Liz Anjorin said her investigations revealed that her colleague, Toyin Abhram ‘leaked’ the story to blogs and she came for her guns blazing.

Toyin Abraham has also responded to her with a strongly worded statement saying, ‘I have instructed my lawyers to take up this matter and she will be hearing from them by Monday’.

Read their exchange below….

Mama please clear the Air how you were Held for Drug peddling search and was Teary all through, I know you won’t tell your gullible fans about that, but if na another thing una go don shake IG.

This is a Gossip Blog and we write stories be it Bad or Good, so deal with that,Iya Adini tell your Fans o,we are waiting and stop dragging who is not.

Musa hold my cloth …Na jeje I dey hustle do my business. 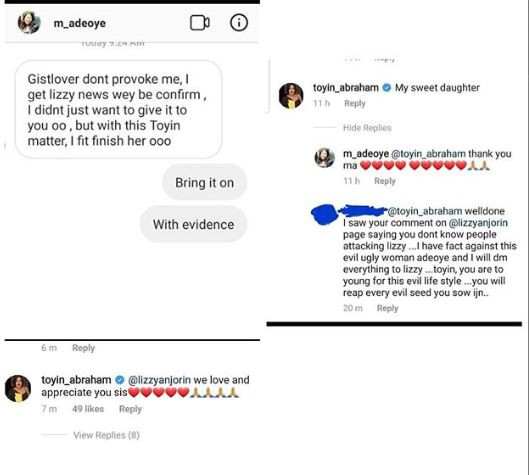 Weekend oloyin re oo. Too much question will force me to release evidence fa..na wisdom they help me keep some facts …that was why I dey work so hard like machine because things about life is bigger than life gangan
.
You need to stay more calm for evidence before you get blocked ..if I block you before you see evidence ..e go pain you , because you need to know HUMAN

It has come as a rude shock that some upstarts masquerading as Nollywood actors keep dragging my name into unnecessary drama whenever they are trolled online. I’ve had my own share of online trolling but not for once did I drag the names of any actor or celebrities into the fray even when we don’t have cordial relationships.

Today, an actress directly mentioned my name as the owner or informant of an Instagram blog, and libeled my person and reputation by implying I planted or published some negative news about her.

Why she mentioned my name, I can’t say. What she’s trying to achieve, I can’t fathom. Long ago, I bade bye bye to unnecessary drama and petty online/offline squabbles and so I won’t descend to her gutter level.

Her so-called “evidence” of my involvement was a comment I left on the page of a fan she suspected is behind the story. How I became connected to the story beats me. This level of cluelessness is mind-boggling.

For the umpteenth time, stop holding me responsible for the actions or inactions of other people as it concerns you. Whether they are my fans or not, I don’t regulate or determine their behaviour or conduct. Nobody holds Beyonce responsible for what her teeming fans, “Beyhives” do.

Anyways, I have instructed my lawyers to take up this matter and she will be hearing from them by Monday. It’s time to put a stop to online bullying and bad behaviour in line with the rule of law.