The Inspector General of Police, Adamu Mohammed, has ordered that disciplinary action be taken against some police officers caught on camera destroying the wares of business owners in Lagos state on Thursday March 26th.

Recall that Lagos state governor, Babajide Sanwo-Olu, on Tuesday March 24th, gave a directive that beginning from Thursday May 26th, all non-essential markets are to be closed so as to curtail the spread of the novel coronavirus.

The officers acting on this directive and that of the state Commissioner of police, Hakeem Odumosu, went out yesterday to ensure that the order was obeyed. However some of the business owners flouted the order and came out for business, and the officers felt it was neccesary to destroy their wares to serve as punishment. 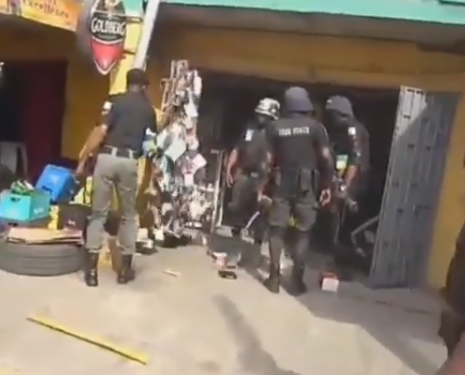 Reacting to the viral video, the police boss directed the state Commissioner for Police, Hakeem Odumosu, to immediately investigate the incident and commence disciplinary actions against all the officers involved.

@PoliceNG @frankmbablog @ElkanaBala @AcpIshaku
WHY MUST WE ALWAYS DESTROY?
Please tell your men to just lock any property that's erring and move on. Vandalism is not the order they were given by @followlasg @jidesanwoolu
#COVID19 pic.twitter.com/axSE6IZEEH

Nigerian man cries out after his cousin was allegedly killed by men of the Lagos state task force while chasing a commercial bus driver...

Nigerian man cries out after his cousin was allegedly killed by...