The American University of Nigeria, founded by former Vice President of Nigeria, Atiku Abubakar, has sacked 406 staff in one day. This comes days after Atiku’s media outfit sacked 46 staff.

On May 1, Workers’ Day, 46 staff of Gotel Communication, a media house owned by Atiku Abubakar, were fired.

Staff of American University of Nigeria, AUN, feared that they would be next and their worst fears became a reality yesterday, May 4, when they received a letter via mail, terminating their employment.

A staff of AUN, who was affected by the sack Said they were given no prior notice.

“They said they couldn’t generate revenue. Money issues,” the affected staff Said when asked for the reason the institution gave for the sack.

The source said the sack letter came from the board of directors of the institution after holding several meetings. The letter was signed by the President of AUN, Dawn Dekle.

When asked if the lockdown might have affected revenue generation, thereby leading to the sack, the source explained that though students were sent home, the lockdown did not slow down their academics.

“They finished their semester online, they wrote their exam online, they were invigilated using Skype. They are now in their long vacation to resume in August as usual.”

Those fired were further asked to return all the company’s property in their possession after the lockdown to enable the University “to pay the severance pay allowed by the contract” and to enable the affected staff to access their retirement savings account. 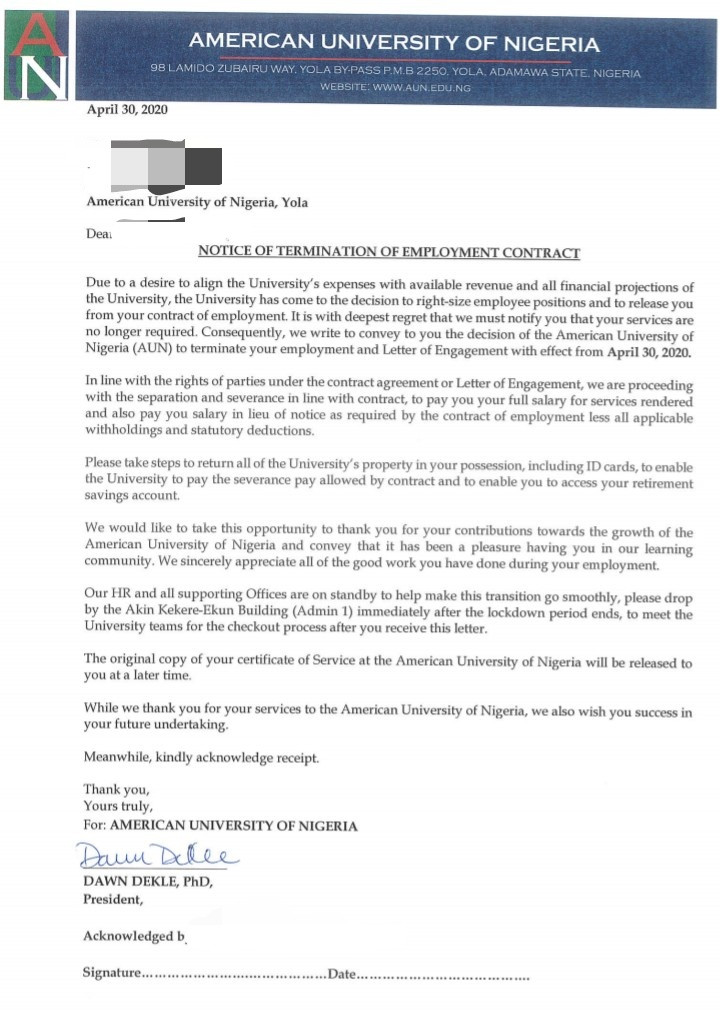 It was also revealed that Alumni of the school who were employed as staff, were also affected by the termination.

King of Photoshop, Ayo The Creator assaulted and arrested after police allegedly found toy guns with him (Video)