A Nigerian taxi driver has narrated how a Special Anti-Robbery Squad (SARS) officer allegedly asked to mobilize his colleagues with N20k after escaping from ritualists who abducted him.

According to @donkashking, he was abducted at about 9:45pm on Wednesday September 23, 2020 shortly after picking up 3 riders from Eleganza before Lekki 2nd toll gate.

The taxi driver revealed that even though two out of the three ritualists were apprehended after some “area boys” intervened, the IPO insisted on getting N20K to mobilize SARS officers who will arrest the gang-member who escaped.

He claimed that IPO is threatening to delay his case and also not release his car which is his source of livelihood.

I ESCAPED RITUAL DEATH BUT VICTIMIZED BY SARS.

I am a bolt driver who picked up 3 riders from eleganza before lekki 2nd toll gate and heading to Oshodi at about 9:45pm on Wednesday 23nd Sept 2020.

On the way, one of them said he will stop at law school after 1st toll gate, on getting there I stopped for the guy to alight and to my shock, the two at the back held me from the back, help onto my throat and dragged me to the floor of the back seat…..

While the one in front took over the steering,at this point they started hitting my knees, shoulders and elbow with harmer to weaken me, I became so weak with pain and remained calm till dey drove to a distant and d driver suddenly said my fuel is finished…

Their commander asked me if I hard fuel keg in the boot and I said yes,so he asked the driver to parked close to afuel station and use the keg to get fuel but the other one said no need to park that he should drive in since they have weakened me already….

At this point I prayed for God’s help because they pulled my black polo and used it to cover my face but when I noticed they where already at d fuel station, I started shouting but they zoomed off and someone drove after us, double crossed us but his car was hit off d road….

So they continued and at this point, the torture on me became more severe, one of them held onto my nose with his teeth with blood pouring out while the other one tightened his hands to my throat,I didn’t even have the voice to begged but only struggled for life…

They already had the music to it’s highest volume and whined up d glasses, while they where driving,I begged them to just go with the car, I had 45k in my wallet (the money I made on previous trips) and I had my piggy bank in the boot where I was saving for accommodation….

In that piggy bank,I already had a lot in it cos I was saving 2k daily and that’s about the second month, I begged them to go with it and let me go but they said they needed my heart and manhood for their ritual,all my begging fell on deaf ears…

This happened till passed midnight, one of them loosened my belt held and the next thing I heard was “commander make we cut this thing and throway this guy, he’s causing lots of attention” but the commander asked him to hold on till they get to ibadan U CANT IMAGINE THE FEAR NOW

They kept driving and I was getting weaker due to the torture but at a point I saw the heads on ppl outside, I summoned courage to shout and struggle, that was how the area guys their ran after us with weapons, one broke my back windscreen and jumped into the car on motion..

In attempt to escape, the driver entered an end-point road and crashed the car against a parked trailer, that was how the mobs captured the two at the back and the one driving escaped but the rest of the area guys picked up anything they could lay hands on in my car..

They picked 3 of my phones, my swift 4G internet moderm, MY PIGGY BANK WITH MY ACCOMMODATION SAVINGS…They literally turned my car upside down. This was happening till MAROKO POLICE MEN came and picked the two criminals and we managed to get my car to the station..

The case was now transfered to #SARS ikeja and my IPO incharge of the case now says I have to pay for investigation, he said they need to apprehend the other guy that ran away and am I like, officer see all I’ve gone through with bandages on me…

I was scheduled for a chest X-ray with Throat and Nose examination but couldn’t go because I had no money left with me but he insisted I bring money to assist the police. I’ve been able to raise 20k, ignored my treatment, I am yet to get a phone (tweeting with my friends phone).

The SARS man has collected the money as at yesterday 6th Sept,the man asked me to come today by 3pm that he’s going to court, I got their today and called him but he shout at me and said I should come back on Friday and ended the call, I called again….and he said he will swear for me if I call him again. You need to see the floor in my car, inside has turned to this green sleepry dirty floor. I don’t know what else to do. My knees hurt so much and I can’t stand for long yet #SARS wants to make money off of me.

When he was taking me to the O/C’s office yesterday, he asked me never to disclose to the O/C that he has collected money from me else my case will be delayed and I may not get my car this year, cooperated yet he is still acting so wickedly…

Kindly help tag the right authorities, I have lost a lot already, it’s my friend that has been responsible for me, NO HOPE FOR ACCOMMODATION AGAIN, don’t know how long I will put up with my friend, Car is completely damaged,No other source of income 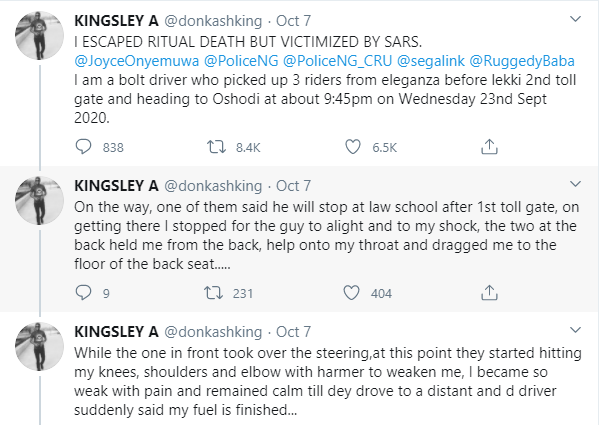 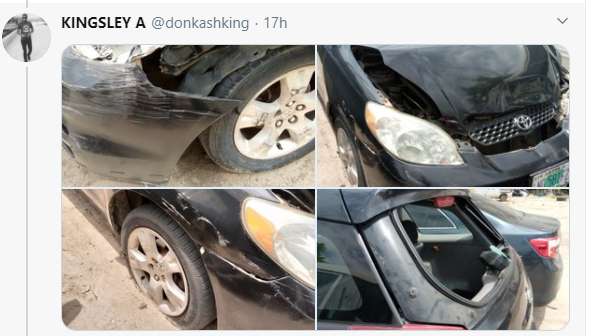 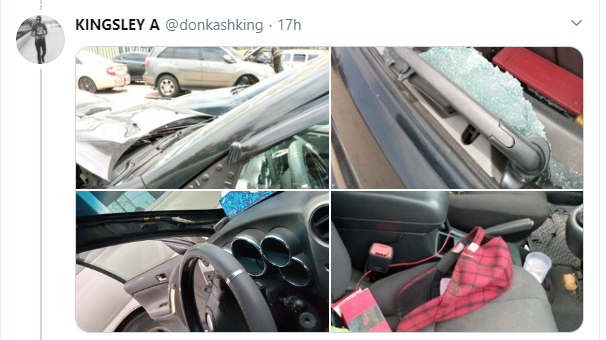